Living along the Los Angeles River, the Native American Tongva tribe were the first inhabitants of the San Fernando Valley district known as Reseda. Following the departure of the Indians, Reseda became a farm town, called Marian, in 1912, named for the daughter of the publisher of the Los Angeles Times, Harrison Gray Otis. It was around 1920 that the community was renamed Reseda, after a North African dye plant which grows only in hot, dry climates, similar to that of the area.

Reseda is considered one of the first actual suburbs in the San Fernando Valley, and was being sub-divided and developed as World War II veterans were making their way home. Orange groves gave way to housing tracts and by 1950, the population in the Valley had reached 400,000. In the 1980's the area saw an influx of Latino immigrants. That, along with a natural decline in the Caucasian population as a result of aging and lowering birth rates and a decreasing level of income, resulted in the neighborhood changing over from a middle-class community and moving back towards the working class town it had previously been.

A little known fact about the area is that the actual epicenter of the 1994 Northridge Earthquake was located in Reseda, near the intersection of Wilbur Avenue and Saticoy Street. Early reports had put the shaker in Northridge, but by the time tests determined the actually origin, the name had already stuck.

Reseda has been both the location and filming place for a number of major motion pictures, including The Karate Kid, Boogie Nights and Terminator 2: Judgement Day. The last movie has some very famous chases scenes filmed along the channel of the Los Angeles River. Reseda is also mentioned in music, from Tom Petty's song, "Free Fallin," to Soul Coughing's "Screenwriter's Blues."

Reseda has it's own park, which has a large duck pond. During the 50's and 60's, the pond used to have a boathouse where you could rent electric boats by the hour. The park also has lighted outdoor basketball and tennis courts, a lighted baseball diamond, a children's play area, a community room, an outdoor, seasonal unheated pool, picnic tables and barbeque pits. 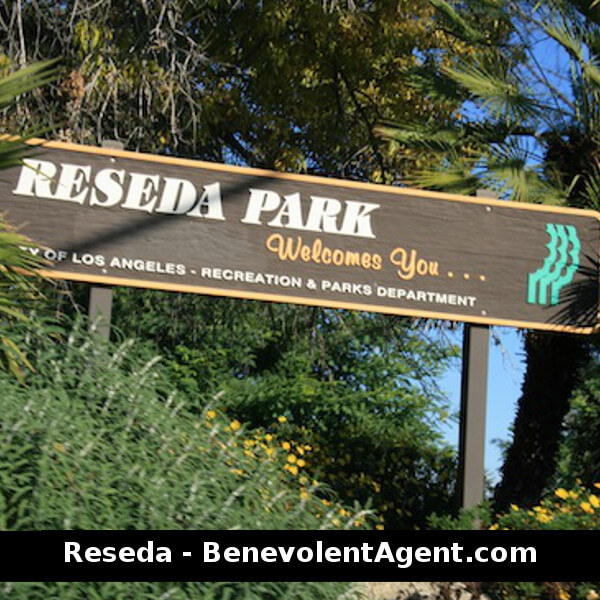